The problem of exponential reviews

Rent review provisions are where algebra and law often congregate to make mischief.

"This case emphasises the dangers that arise from adopting wording and/or formulas for calculations without a genuine appreciation of their effect."

One rent review drafting error that has beset all too many leases leads to exponential RPI rent increases. Found in many different forms, these insidious clauses make an imperceptible difference in the first few reviews. Therefore, they habitually go unchallenged by the unwary business analyst or lawyer, particularly if assessed by a few perfunctory illustrative calculations. Sometimes referred to (incorrectly in mathematical terms) as ‘double-compounding’ RPI rent reviews, read literally, they lead to rocketing increases after 10 to 15 years. Rent that starts out at a few thousand pounds per annum is in the billions after a few decades. Whilst this result might seem commercially absurd, courts have been willing to accept the literal interpretations of such unorthodox review clauses. Only in 2015, the UK Supreme Court in Arnold v Britton¹ accepted review provisions which resulted in service charges becoming unaffordable and, consequently, the underlying assets (in that case, chalets) virtually unsaleable. The Court refused to let the tenant escape what it considered to be a bad bargain.

Therefore, the decision in Monsolar IQ Limited v Woden Park Limited² has been long-awaited by landlords and tenants, particularly those in the renewables, utilities and telecommunications sectors where these erroneous rent review provisions are most frequently encountered.

The case concerned a 25-year lease for 15 acres of bare agricultural land in Wales. Planning permission had been granted to construct and operate a solar photovoltaic park (solar farm). The lease, which was entered into on 8 July 2013, had been drafted by Mr Feakins, the sole director of the landlord, from an online template. At the time, Mr Feakins was also the sole director of the tenant, a company that had been incorporated to hold the lease as part of a structure to enable a sale of the project development rights. Subsequently, control of the tenant passed to others.

Rent was initially £15,000 to be reviewed annually in accordance with the following formula:

Put in more simplified formulaic terms, the reviewed rent was essentially to be:

"The decision in Monsolar IQ Limited v Woden Park Limited has been long-awaited by landlords and tenants, particularly those in the renewables, utilities and telecommunications sectors where these erroneous rent review provisions are most frequently encountered."

On this literal reading of the clause, therefore, on each review date, the rent would increase by the aggregate RPI increase over the entire part of the expired term.

Assuming an average RPI increase equal to the average increase over the 20 years before the date of the lease (2.9%), the exponential increase in the rent under this provision is apparent from this graph: 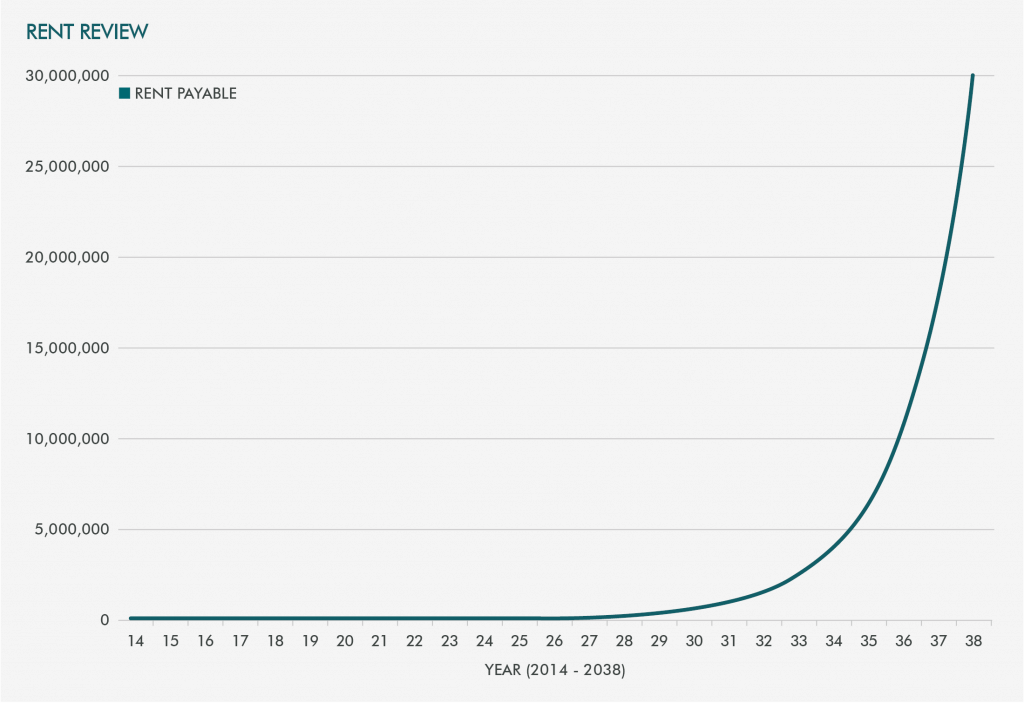 The tenant argued that this result was so arbitrary and onerous that the rent review formula contained an obvious mistake and sought a declaration from the court accordingly. However, the landlord argued that the language of the rent review mechanism was unambiguous and the fact that it might produce a result unfavourable to the tenant was not a sufficient basis for concluding that there was a mistake.

The basic principle of contractual interpretation is to ascertain the objective meaning of the language used by the parties. The starting point is that the court should generally give effect to the natural and ordinary meaning of the words used, even if this produces an unfavourable or surprising result. Indeed, as Lord Neuberger noted in Arnold v Britton, “when interpreting a contract, a judge should avoid re-writing it in an attempt to assist an unwise party or to penalise an astute party”.

However, as Lord Hoffmann noted in Investors Compensation Scheme v West Bromwich Building Society³, where the natural and ordinary meaning of the words produces an absurd outcome, “the law does not require judges to attribute to the parties an intention which they plainly could not have had”. Lord Hoffmann subsequently observed in Chartbrook v Persimmon⁴, “there is not, so to speak, a limit to the amount of red ink or verbal rearrangement or correction which the court is allowed”. In order to adopt such a “corrective interpretation”, it is necessary to show that it is clear:

"Even without making assumptions about what may happen to RPI during the term of the lease, the results produced by the formula were irrational and arbitrary."

Mr Justice Fancourt noted that the rent review formula in the lease was unorthodox and not in use as a standard commercial precedent. While this is true, as noted at the outset, this formula, albeit expressed in varying language, has been found in many solar farm, telecoms and other leases in use. Therefore, this case addresses a wider issue and the decision offers welcome clarification.

The judge said that, although the formula purported to use a measure of inflation to determine the amount of the annual rent increase (or decrease), in fact it did so in a way that did not increase or decrease the rent according to the way the RPI is intended to operate, nor according to any measure of inflation in the previous year. The judge therefore agreed with the tenant that, even without making assumptions about what may happen to RPI during the term of the lease, the results produced by the formula were irrational and arbitrary.

Arguments as to whether the rent review mechanisms had an absurd effect given the growth of the rent by the end of the term of the lease were, in the judge’s view, subtler. However, he noted that the rent payable would inevitably become unaffordable towards the end of the lease unless there was an equivalent exponential growth in the value of electricity. In 2013, when the lease was entered into, the wholesale value of electricity was volatile, but the general trend was one of significant growth in value. Nevertheless, noting that the value of Government subsidies under the Renewable Obligation Scheme (ROS) would not increase in real terms with time, the judge concluded that a reasonable observer would conclude that the increase in rent would inevitably outstrip any increase in the value of electricity. Further, the existence of a break clause, which the landlord argued meant the tenant could escape the more extreme consequences of a failure, was no answer, since it did nothing to mitigate the irrational and arbitrary way the rent review formula operated. Observing that the lease was not a negotiated arm’s length transaction, but was instead created as a vehicle for the sale of development rights in the solar park, Mr Justice Fancourt commented that it was difficult to accept that the landlord could have intended the formula to operate as written, since it would either suppress the sale value of the rights or prevent a sale to any well-advised purchaser.

The decision and new formula

The Court therefore determined that a drafting mistake had been made.

As to what the rent review provisions were objectively intended to mean, the tenant had argued that the RPI figure was intended to be applied each year to the original rent of £15,000, essentially as follows:

However, Mr Justice Fancourt disagreed, holding that RPI was intended to apply to each year’s current rent, on an annual and cumulative basis.

The effect was to compound increases in rent from year to year, but that was neither irrational nor arbitrary, since it would preserve the value of the rental income enjoyed by the landlord in real terms by an adjustment for the effect of inflation or deflation in the previous year. By contrast, the simple indexation argued for by the tenant would make no allowance over a 25-year term for increase in the value of the land, or to reflect an increase in real terms in the tenant’s income derived from the land.  That would be surprising in a lease over such potentially valuable land which contained no profit share for the landlord and an unrestricted tenant-only break option.

"It is self-evidently better to have good drafting at the outset than to rely on the court’s “red ink”."

In taking this approach the Court showed that is willing to adopt a more contrived interpretation when a less forced one was proffered by the tenant. In other words, the Court applied considerably more ‘red ink’ than was required to produce, mathematically, a similar commercial outcome.

This case emphasises the dangers that arise from adopting wording and/or formulas for calculations without a genuine appreciation of their effect. Whilst the court came to the tenant’s aid in this case, and its decision is undoubtedly the correct commercial result to address an absurd contractual outcome, each case turns on its facts. Moreover, had the landlord got permission to appeal to the Court of Appeal, it is possible, given then the approach in Arnold v Britton, that the superior court may have reached a difficult conclusion. Therefore, there is no substitute for a good grasp of algebra amongst parties to leases and their lawyers. It is self-evidently better to have good drafting at the outset than to rely on the court’s “red ink”.

Please do not hesitate to contact us if you have any queries regarding rent reviews or indeed any contentious real estate matter.